I was recently asked what was the actual thing that prompted me to go gray. And it was an interesting question because had I been asked this question three years ago I would have had a totally different answer.

There were a couple of catalysts that prompted me to stop dying my hair in April of 2017. I had been searching for an organic hair dye for a while and in the end I was left empty handed. The fact of the matter is, if your hair dye is working (regardless of organic label claims) it’s using the same health compromising actives that conventional hair dye is using. And that’s the truth. There has been no new hair color technology that’s been developed in over 100 years. So if your “organic” hair dye is covering your grays, it’s employing PPD or substitutes like PTD. The exact same actives that conventional dyes employ.

I did find one alternative that I can recommend. It’s called Hairprint. It’s formulated with just 8 food-grade ingredients and it really works. I know because I used it exclusively for 14 months and I loved it. The problem for me here was it’s only offered at very few salons across the country and so for the majority of us it’s a D.I.Y. solution. And if you know anything about me, I despise D.I.Y. It’s more like D.I.WHY if you ask me. I mean, I want to go to the salon and get pampered. What I don’t really look forward to is bending over a sink for 3 hours on a week night. Take it from me, that get’s old real fast.

I was sick of spending the time and it just started really feeling like work to keep my hair looking…well, not gray.

Then the other thing that happened is one day I came home and said to my husband, What if I just quit dying my hair? He was so supportive yelling out “YES!” before I even finished my question. But he said it a little too loud and a little too fast which left me wondering, How long have you been waiting for me to ask this question!?

Anyways, those were all supporting factors in the moment that helped me take the physical leap. But I really think the actual thing that prompted me to go gray happened 5 years prior to that.

Jason and I decided to grab dinner one night at a local Hingham, MA restaurant called Cafe Tosca. One of my faves. When we walked in, my eye caught this woman sitting at the bar with her partner.

I didn’t know who she was, I’d never seen her before. She was sitting there, looking BEAUTIFUL. Radiant skin. Laughing. Sharing a bottle of wine and a pizza with her partner. And she had a full head of curly gray hair. I couldn’t stop staring at her. It was one of those things where I was listening to my husband talk but stealing glimpses of her over his shoulder. Like, she was happy, and beautiful and had a full head of GRAY hair. It was totally short circuiting my brain.

And then the next thing I knew my legs just got up and started walking toward her direction and I was like OMG. Stop. Lisa, don’t do this. And then I heard my own voice saying, I love your hair, was that hard to do or…?

And we talked for about 15 minutes. She told me how her boys hated it at first, how she wore a lot of scarves and hats at the beginning and (I forget her exact words but the conversation ended with something along the lines of) it was the best decision I ever made.

And that. That was probably the most powerful moment for me. It planted a seed in my heart that eventually budded, bloomed and now thrives with full conviction.

By just BEING. Being brave. Being strong. Not conforming and living her truth. That woman ripped the blinders off of my world and gave me one of the most beautiful gifts of self discovery I’ve ever known.

And the part that really gets me is to this day, she has no idea the impact she had on me. Or the impact she’s had on the women after me. Because I have gone through this journey publicly, I get emails now from women who say the same to me. I felt like I could do this because I saw you do it.

I felt like I could do this because I saw you do it.

Think of the impact we can all have on each other as women. I love this quote because it really says it all:

You can impact the world by just taking that step. And it doesn’t have to be loud or big or persuasive. It’s just being brave enough to be you. And I know today there are more woman who are living transformed and gray than there were just 2 years ago and it all goes back to that woman sitting in the bar. She was the catalyst. She was my inspiration. She changed my world and the world around me. Just by putting one foot in front of the other.

If I can be frank, I honesty started this journey thinking gray hair is ugly, less than, insuperrior…I mean, fill in the blank with all the negative adjectives here – and I’ve finished it with my head held high, no longer having to convince myself that gray is beautiful…or that natural is beautiful. I look in the mirror and I truly see it and feel it. It’s a part of me in a way that it never was. And I think that type of paradigm shift can only happen when we are willing to do something scary.

Yeah. Going gray was scary. Especially when you have people in your circle tell you not to do it. At the beginning of this experience, I let the non supporters take up a lot of real estate in my head. But eventually I turned up the volume of the supporting voices around me and the rest is history. If you take anything away from this post, don’t let one or two voices control your experience. And find community. Seek out support.

I had no idea going through this with an audience would be so impactful. It’s been apart of my journey, my healing, my transformation as a woman. The power of support and community along the way has really propelled my experience to a point where I live without a shadow of a doubt that my hair looks beautiful. Not even the tiniest wonder or what if…I honestly catch myself wishing my hair was whiter!

A very big key to my success was (and is) community. Examples. We need to see more of us going gray. We need to normalize gray hair so it’s seen as an option for woman that is just as equally as beautiful. We, as woman can be each others community just by BEING. Like that woman I saw in the bar. She blew my world open because I saw myself in her. I saw a solution.

Do you know that I’ve had woman say, I didn’t even know it was an option to go gray. “I didn’t even know it was an option.” (!!???) You know what this is?! It’s a societal construct that we’ve been conditioned to believe as truth. And you want to know how we change it? By changing our landscape. We need more role models, more women out there living their truth whether that be with their hair, their body, their career…When woman see woman they can identify with DOING IT, they will know they can do it too. They will just KNOW. It won’t be a matter of what if anymore. It will be a matter of when.

If you are looking for community around going gray, check out The Gray Book on Facebook. I love this space for inspiration, role models, examples support and more. Because girl, you can do this too.

For more of my going gray journals check out these posts: 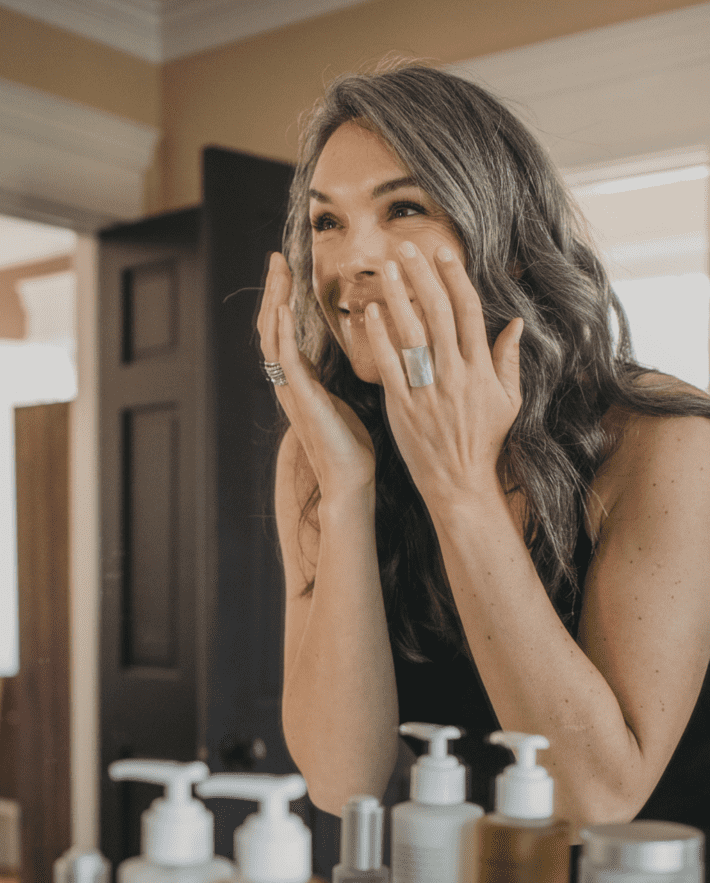